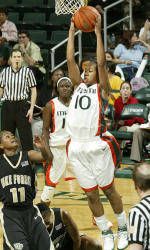 CORAL GABLES, Fla. – The University of Miami women’s basketball team looks to avenge an early-season loss and bounce back from Sunday’s disappointing performance, as they take on Georgia Tech in an ACC showdown on Thursday evening at the BankUnited Center.

Senior Renee Taylor comes off a 17-point outing — including four three-pointers — at Boston College, and continues to lead Miami with an ACC-best 18.9 points per game, including 2.3 three-pointers an outing to rank fourth in the league. She is just 41 points shy of becoming the 19th member of Miami’s 1000-point club in just her second season with the `Canes.

Junior Maurita Reid adds 14.7 points (ninth in the ACC) and a league-leading 3.4 steals per game — which ranks seventh in the NCAA — for the Hurricanes. She knocked down three three-pointers at BC, finishing with 14 points for her ninth-straight double-figure scoring game. In addition, Reid has hit three-or-more treys in three straight and in seven of the last nine outings.

Freshman Charmaine Clark has become a mainstay in the Hurricane lineup, starting 16 games this season — including 10 straight in ACC play. She is one of just five players to rank among the ACC’s leading freshmen in four or more statistical categories, and is averaging 12.9 points and 6.4 rebounds for the Miami over the last seven games.

A Look at Georgia Tech
The Yellow Jackets come off Sunday’s 69-62 win over N.C. State. Stephanie Higgs and Janie Mitchell combined for 73 percent of Georgia Tech’s offensive output, finishing with 25 and 20 points, respectively. Higgs knocked down three from long range, while Mitchell went 6-of-6 from the charity stripe and grabbed a game-high nine rebounds. While Georgia Tech is the only non-ranked team to defeat Maryland this year, handing the Terps just their third ACC loss of the season in Atlanta on February 1, they are just 2-4 in league road games.

The Series
Thursday marks the 10th meeting between Miami and Georgia Tech, with the Hurricanes holding the 6-3 all-time series lead. The Hurricanes struggled in their meeting in Atlanta on January 15, shooting a season-low 24.6 percent — including a dismal 36.4 percent (4-11) from the line — en route to a 52-37 loss, however they have won three of four games versus the Yellow Jackets in Coral Gables. In the teams’ last meeting at the BankUnited Center on February 26, 2006, Miami used double-overtime to defeat Georgia Tech, 90-85. Thursday’s game will be broadcast live online via ACC Select.