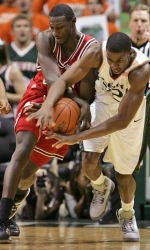 Trailing by 16 with 7:50 left, the Wolfpack scored 11 unanswered points in the next 2:40. Ben McCauley scored six of the points and his short jumper ended the run, reducing the Miami lead to 63-58.

After the Wolfpack’s Courtney Falls hit a 3-pointer to tie at 33-33 in the opening seconds of the second half, the Hurricanes responded with a 12-3 run during a 4:35 span. Brian Asbury’s short jumper capped the run to put Miami ahead 45-36 with 14:30 remaining.

Except for a North Carolina State 7-6 advantage early in the game, Miami led nearly the entire first half. McClinton scored 12 points in the first 20 minutes, including two 3-pointers and a running jumper at the buzzer to end the half.