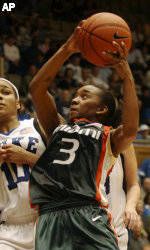 Looking to curtail its five-game skid, Miami returns home to the BankUnited Center to battle ACC opponent Boston College on Thursday, January 18, with one of the teams walking way with its first ACC win of the 2006-07 season.

Junior guard Maurita Reid comes off a team-best 12-point, five-steal performance at Georgia Tech and is second on the team in scoring (13.6 ppg) and rebounding (6.0 rpg). She is tops on the team and second in the ACC with 3.3 steals per game, and also ranks among the league’s top 10 with 1.8 three-pointers per outing.

A Look at Boston College
Boston College also finds itself in the midst of a losing streak, having dropped the last three straight — including a 65-63 overtime defeat at Virginia on Sunday. Three players finished in double-figures, including a career-high 23 points from freshman guard Mickel Picco. For the season, 6-4 senior forward Kathrin Ress leads the Eagles with 17.4 points and 8.9 rebounds per game — ranking among the ACC’s top-five in both categories, while freshman guard/forward Elisabeth Egnell adds 10.1 points and 6.6 boards an outing.

The Series
Thursday’s game will mark the 25th meeting between Miami and Boston College, with UM leading the all-time series, 16-9. The Hurricanes split the series with the Eagles in each of the last two seasons, with each team winning at home.