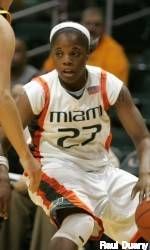 In a tough defensive game, the Yellow Jackets held the Hurricanes to a season-low 37 points on 24.6-percent shooting. Georgia Tech connected on 38.9 percent of its shots, including 50 percent in the first half, and dominated the boards with a 51-31 rebounding advantage.

With their fifth-straight loss, the Hurricanes fell to 9-10 overall and 0-4 in the ACC, while the Yellow Jackets improved to 11-6 on the season and 2-2 in the league.

The Yellow Jackets got off to a fast start, scoring the first eight points of the game. Trailing by 10 midway through the period, a Cunningham three-pointer sparked a 10-3 Hurricane run, as Miami closed its deficit to three points, trailing 20-17 with 8:40 remaining in the half. But the Hurricanes would be held without a field goal for the remainder of the period, and the Yellow Jackets outscored the Hurricanes 11-2 over the final 8:22 to take the 31-19 lead into intermission. The 19 points marked the second-lowest first-half total for Miami this season.

Miami’s offensive woes continued in the second half as the team managed just two field goals in the first 12 minutes. Trailing by as many as 24 points, the Hurricanes engineered a late nine-point run, capped off by a Reid trey, for the final 52-37 score.

The University of Miami women’s basketball team returns to the hardwood on Thursday, January 18, versus Boston College (10-7, 0-3 ACC). Tip-off is scheduled for 7 p.m. at the BankUnited Center.