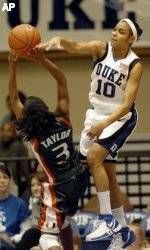 DURHAM, N.C. (AP) – Duke coach Gail Goestenkors figures her team has plenty of room to improve on defense. At this rate, that could be a scary thought for the Atlantic Coast Conference.

The third-ranked Blue Devils held Miami to 26 percent shooting and forced 23 turnovers in their easy 72-42 win to open the league season on Wednesday night, a game that amounted to the latest exhibition in Duke’s knack for shutting down opponents this season.

The Blue Devils (15-0) have now held 11 opponents to less than 30 percent shooting while allowing just three teams to crack the 50-point mark.

“We knew we’d be good (defensively),” Goestenkors said. “But we know we can get a lot better. We’re nowhere near where we’ll be come tournament time.”

The formula starts with point guard Lindsey Harding, the ACC’s reigning defensive player of the year who leads their aggressive perimeter pressure. Meanwhile, Alison Bales, a 6-foot-7 senior, anchors the inside to block shots and battle on the boards.

Duke’s worst defensive day this season was allowing then-No. 22 Texas to score 52 points on 39.2 percent shooting in a 28-point victory.

“It’s just the mentality we have,” Goestenkors said. “It’s everybody on the court playing together and understanding what our scheme is for that particular game and (taking) great pride in shutting teams down.”

Nothing changed against the Hurricanes (9-7), who missed 16 of 17 shots over the final 12 1/2 minutes of the first half to fall behind by 23 points at the break.

“In terms of athletic ability and pressure and all that, I don’t think that’s what overwhelms you about Duke,” said Miami coach Katie Meier, who played collegiately here from 1985-90. “It’s just that they’re so smart. It’s just the cohesiveness and the communication and their ability to make adjustments.”

With that kind of performance, Duke didn’t need a big showing at the other end. The Blue Devils shot just 37 percent for the game, including 2-for-17 from 3-point range, but managed 18 second-chance points off 22 offensive rebounds and scored 20 points off turnovers.

“You can’t base a game on how many shots fall and how many don’t fall,” Waner said. “If we can do the other things, we’ll be fine, just not relying solely on the outside shot.”

Renee Taylor, who came in as the ACC’s leading scorer at 21.1 points per game, finished with 15 on 4-for-14 shooting.

Things went awry for Miami quickly. The Hurricanes led 10-9 on Carla Williams’ jumper over Bales with 12 1/2 minutes left, but Duke held Miami to just one field goal and eight turnovers for the rest of the half. Miami shot 5-for-27 in the half, falling behind 37-14 at the break and trailing by as many as 41 points after halftime.