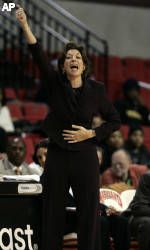 Head coach Katie Meier, who was a four-year letterwinner at Duke from 1986-90, makes a return to her alma mater for the first time Wednesday evening.

Meier and the Hurricanes are 9-6 after splitting a pair of games at the UM Holiday Tournament last weekend in Coral Gables.

Averaging 27.5 points over the last four contests, senior guard Renee Taylor leads the Hurricanes with an ACC-leading 21.1 points per game.

A Look at Duke

The third-ranked Blue Devils take on Miami with a perfect 14-0 record behind an impressive 32.6 scoring margin. Through 14 games, Duke has only allowed 50 or more points in three games while averaging 77.8 points per game.