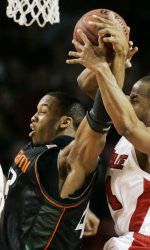 Miami Falls On The Road At Louisville, 82-59

LOUISVILLE, Ky. (AP) – Jerry Smith scored 22 points to go with a career-high 12 rebounds to lead Louisville to an 82-59 win over Miami on Saturday at Freedom Hall.

Terrence Williams scored 18 points and added 11 rebounds for the Cardinals (7-4), who never trailed while winning their second straight.

One day after sending prized freshman center Derrick Caracter home to New Jersey, the rest of Louisville’s freshmen class made sure Caracter wasn’t missed. Smith, Earl Clark and Edgar Sosa combined for 39 points as the Cardinals held Miami to 35 percent shooting from the floor and forced 17 turnovers.

Dwayne Collins led the Hurricanes (7-6) with 17 points and eight rebounds, but Miami had trouble with Louisville’s press and could never get into a rhythm offensively.

Miami guard Jack McClinton entered the game averaging 19.6 points per game, tops in the ACC. But McClinton missed his first six shots from the field and didn’t score until less than 10 minutes remained. He finished with nine points.

Louisville, which had struggled offensively most of the year, made 10 3-point field goals and outrebounded the Hurricanes 42-28. The win was Louisville’s first significant non-conference victory of the season.