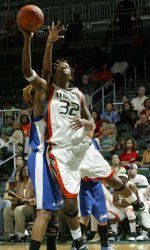 Coming off a 10-day rest, head coach Katie Meier and the Hurricanes welcome TexasState to the BankUnitedCenter Saturday with an overall record of 7-3. Miami boast a perfect 5-0 record in home games this season and a 4-0 unbeaten mark in games played at the BankUnited Center â?” UMâ?TMs Dec. 1 home game versus Jackson State was played at the Knight Sports Complex.

Senior guard Renee Taylor continues to pace the ACC in scoring, averaging 19.1 points per game and ranks second in the league in free throw percentage (.885).

Junior guard Maurita Reid is second on the UM roster in scoring (15.0) and is third in the ACC in steals per game (3.1).

Miamiâ?TMs hottest player of late has been sophomore forward/center Brittany Denson averaging 18.5 points and 10.0 rebounds over the last two games. Denson is third on the team with a 10.7 scoring average and leads the Hurricanes in rebounding (8.3).

Texas State head coach Suzanne Dox, now in her 10th season at TSU, and the Bobcats head to Coral Gables having won five-straight. The Bobcats have stifled opponents during their current win-streak, allowing just 42.8 points per game.

Senior forward Erica Putnam leads the team in rebounding with 7.4 rebounds per game.

Saturdayâ?TMs game will mark the first meeting between TexasState and Miami.

Fridayâ?TMs game will be broadcast exclusively via streaming video on ACC Select at www.accselect.com. Hurricanes fans can purchase a SingleEventPass ($3.99 per event) or an AllEventPass ($5.99 per month) which allows unlimited access to games.