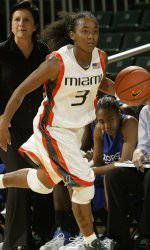 Playing in their third game in five days, head coach Katie Meier and the Hurricanes look to rebound from a 60-55 loss at Michigan when they take on cross-town rival Florida International Tuesday evening at Pharmed Arena.

Winning four its last five game, Miami has outscored its last five opponents by an average of 16.8 points and currently rank fifth in the ACC with 73.8 points per game.

Junior guard Maurita Reid ranks second on the team with 14.8 points per game followed by sophomore center Brittany Denson (9.3), who leads the team in rebounding (7.9) and is coming off a 14-point, eight-rebound performance at Michigan.

Florida International head coach Cindy Russo, now in her 28th season at FIU, and the Golden Panthers are 3-3 on the year after dropping their last two games against Tulane and South Florida.

Miami has squared off with FIU more time (52) than any other opponent and currently holds a 32-20 advantage in the all-time series, including a pair of victories last season.

The Hurricanes won the last match-up, a 95-83 decision at the BankUnitedCenter March 18 in the First Round of the 2006 WNIT.