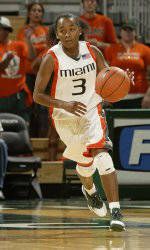 Senior guard Renee Taylor who lead the University of Miami women’s basketball team to two victories and the team championship of the UM Thanksgiving Tournament last weekend has been named the Muscle Milk Student-Athlete of the Week for the period November 20-26.

Taylor averaged 23.5 points in the two-day tournament and was named the Tournament MVP. Against Indiana in the championship game Saturday, she scored 28 points as the Hurricanes defeated the previously unbeaten Hoosiers 79-70. In the opening round game Friday, Taylor scored 19 points and had four steals as UM defeated Nicholls State 85-42.

With the two wins in the Thanksgiving Tournament, the UM women are now 6-1 on the season marking just the seventh time in school history that the program has won six of its first seven games.