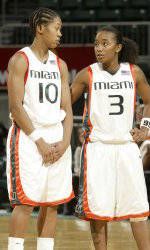 The University of Miami women’s basketball team will play the role of tournament host this weekend as they take on Nicholls State Friday at 7 p.m. at the BankUnited Center as part of the two-day UM Thanksgiving Tournament which will also feature Indiana and Wright State.<?xml:namespace prefix=”o” ns=”urn:schemas-microsoft-com:office:office”?>

The winner of Friday’s <?xml:namespace prefix=”st1″ ns=”urn:schemas-microsoft-com:office:smarttags”?>Indiana-WrightState match-up, scheduled for 5 p.m., will advance to Saturday’s championship game at 7 p.m. versus the winner of the Miami-NichollsState game.

Head coach Katie Meier and the Hurricanes take to the weekend with four days rest following a four-game, seven day stretch last week which included three games in five days on the road in California.

Junior guard Maurita Reid ranks second on the team in scoring (14.0) followed by sophomore forward Brittany Denson (10.2) who leads the team in rebounding (8.4).

Still in search of their first victory of the season at 0-3 fourth-year head coach Mark Cook and the Lady Colonels will travel to Prairie View A&M Wednesday evening prior to heading to Coral Gables.

NichollsState has seen most of its point-production from senior guard Jamie Octave who leads the team in scoring (17.7). Three members of the team – junior guard Claire Barry, sophomore forward Dominique Washington, freshman guard Barbara Febus – are tied for second in scoring with 8.0 points per game.

This will be the first meeting between the Miami and NichollsState women’s basketball programs.

Friday’s game will be broadcast exclusively via streaming video on ACC Select at www.accselect.com. Hurricanes fans can purchase a SingleEventPass ($3.99 per event) or an AllEventPass ($5.99 per month) which allows unlimited access to games.