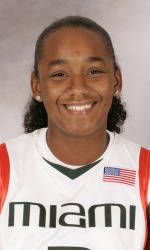 CORAL GABLES, Fla. – Miami junior guard Renee Taylor has been named the Atlantic Coast Conference Player of the Week after averaging nearly 21 points per game to lead UM to a 3-1 record during a four-game, seven-day stretch last week.

Taylor, the ACC’s smallest player at 5-foot-2, averaged 20.5 points and 4.0 rebounds per game last week. The senior averaged 15.0 points on 44.2 percent shooting in the second half during those four games.

Monday at home against Wisconsin-Milwaukee, the Harlem, N.Y. native recorded a game-high 23 points with four assists to lead the Hurricanes to a 78-71 victory over Wisconsin-Milwaukee. Two days later, and over 2,500 miles away from Coral Gables, Taylor knocked down a game-high 26 points, including 18 in the second half, as Miami won its first road game of the year at Santa Clara, 85-83. On Friday, Taylor registered 22 points in UM’s 69-68 heartbreaking loss at Saint Mary’s in Moraga, Calif. Sunday, Taylor turned in 11 points and dished out six assists in just 26 minutes of play to lead Miami to a 69-59 victory at San Francisco.

Taylor, who ranks second in the ACC in scoring (20.0 ppg), and the Hurricanes return to action on Friday when Miami hosts Nicholls State in a Thanksgiving Tournament held in Coral Gables, Fla.