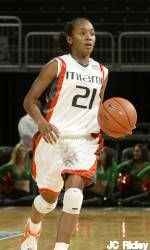 Second-year head coach Katie Meier and the 2006-07 edition of the UM women’s basketball program open the season Friday night at home against Georgia State of the Colonial Athletic Association.

Meier returns to build upon her debut season at UM which saw her lead the Hurricanes to an overall record of 17-13 and a sixth-place 6-8 mark in league play. In her first season at UM, Meier led Miami to just it’s 10th postseason appearance in school history as the Hurricane earned a berth into the 2006 WNIT, where they advance to the second round.

Senior guard , a 2006 All-ACC Honorable Mention selection, is Miami top returning point-getter from last season, averaging 15.6 points per game. Despite being the ACC smallest player at 5-foot-2, Taylor finished sixth in the ACC scoring, second in free throw percentage (.836), third in steals per game (2.37) and 10th in assists per game (3.83).

Sophomore center returns as Miami top rebounder and second-leading scorer from 2005-06. As a true freshman, Denson averaged 5.3 rebounds per game and 5.7 points per game before missing the final eight games of the year with a season-ending knee injury.

Head coach Lea Henry, who enters her 13th season at GeorgiaState as the school’s all-time winningest coach with a 195-152 record in 12 seasons, and the Panthers will also open their 2006-07 season Friday night.

The Panthers are led by senior guard Kelcey Roegiers-Jenson, a 2006-07 Preseason All-CAA Second Team selection who led GSU in points (14.0) and assists (4.62) per game a year ago. Roegiers-Jenson also finished second on the Panther roster in rebounding (5.4 rpg) and steals (1.66) per game.

Friday’s game will mark the eight meeting between Miami and GeorgiaState with the Hurricanes holding a 4-3 advantage in the series. Miami won the last contest, a 68-49 decision Jan. 24, 1991 in Coral Gables.

The first 200 fans to Friday’s game will receive free popcorn courtesy of the BankUnitedCenter and the University of Miami.

Miami Hurricane women’s basketball fans will have the opportunity to collect player trading cards during all home games. The first 200 fans in attendance at each game will receive the cards which will feature a different player each game during the 2006-07 season.

Enjoy Free Lunch with the Hurricanes Nov. 13
The first 1,000 fans in attendance at UM’s Monday, Nov. 13 game versus Wisconsin-Milwaukee – scheduled for 12 p.m. – will receive a complimentary lunch on behalf of the University of Miami.

All UM employees and students will receive complimentary admission to Monday’s game with a valid Cane Card.

Don’t Miss Youth Day on Nov. 13
On Monday, November 13, at 12:00 p.m., the Women’s Basketball team will be hosting Youth Day at the BankUnitedCenter. The Miami Hurricanes will take on the University of Wisconsin-Milwaukee and all elementary and middle schools are invited to participate. The University of Miami will provide FREE transportation to the game as well as FREE lunch at the game. All schools interested in participating can call the Sports Marketing department at 305.284.2678. Don’t miss this great opportunity to bring your school out to the game!