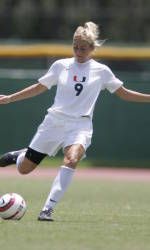 Despite being out-shot by a total of 19-to-4 on the night, the Hurricanes managed to get off three shots on goal, including a pair of second-half attempts by Courtney Alexander and Rachael Rigamat, but could not penetrate the Blue Devil net.

Gummersall’s goal was followed-up upon in the 38th minute when teammate Darby Kroyer sneaked a shot by UM keeper Lauren McAdam, who fell out of position attempting to block a previous shot by Duke Elisabeth Redmond.

Duke added a third goal in the 85th minute on goal by Lauren Tippets, who knocked down a rebounded shot off the crossbar by teammate Katie Roark.