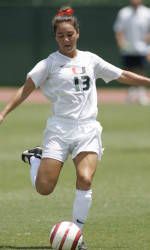 Heinicke’s two-goal performance was part of the largest scoring outing by a Hurricane team since the 2002 season when Miami lost 6-5 Oct. 18 in overtime to Rutgers. The four goals by the Hurricanes (8-8-1), who snapped a three-game slide with the victory over the Osprey’s (11-5-1), was the highest output in regulation play since a Sept. 25, 5-1 decision over Florida International in 2002 as well.

“I really thought everyone played well tonight,” said head coach Tricia Taliaferro. “I think we were extremely creative in the shots we were able to take. I was really pleased with the way we scored, every goal seem to come out of a different situation.”

Heinicke’s first goal was set up early in the 17th minute when the Bay Village, Ohio native fielded a pass from teammate Paulelette Ricks-Chambers just inside the right-side box. Heinicke gained possession and fired a shot from nearly 20 yards away into the far-left post past UNF keeper Heather Gosselin.

Miami added to the 1-0 lead just before the end of the first period on an unassisted goal by Rachael Rigamat, who beat Gosselin on a one-on-one to score in the far left post in the 48th minute.

Down by a pair of goals, North Florida answered with the start of the second period as Christine Brewer scored on an impressive shot past UM keeper Lauren McAdam seconds into the 54th minute to bring the Osprey’s within one goal.

Brewer’s goal, which would be North Florida’s first and only shot at the UM net all evening, proved to be UNF’s only flash of a comeback as Heinicke registered her second goal of the match just over two minutes later.

Heinicke’s second goal, which was flicked over Gosselin’s head, was set up by a pass from Sheuneen Ta into the top of the box.

With a comfortable 3-1 lead, the Hurricanes added an insurance goal in the 67th minute when freshman Jessica Wyble charged into to box past three UNF defenders to score in the far left post past Gosselin.

Excluding McAdam, all but one UM starting position player recorded a least one shot as Miami out-shot the Ospreys by a total of 25-to-3, including 11 shots on goal to UNF’s one – both of which marked season highs for the Hurricanes.

The Hurricanes will wrap up the 2006 regular season Friday at Cobb Stadium as they play host to ACC rival Duke at 7 p.m. Fans are invited out as Miami honors seniors Alex Alford, Julie Brooks, Kristen Chapmen and Kristen Kenney in what will mark their final regular season games at Cobb Stadium.