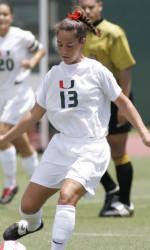 Hurricanes Take on No. 9 Wake Forest Sunday at Cobb Stadium

CORAL GABLES, Fla. – The University of Miami women’s soccer team will attempt to knock off their second top 10 team of the season Sunday, playing host to No. 9 Wake Forest at Cobb Stadium at 1 p.m.

The Hurricanes take on the Demon Deacons with an overall record of 7-7-1 and an ACC mark of 1-6-1. Miami has been dominant at home this season outscoring opponents by a total of 10-to-4 in seven matches. The Hurricanes have yet to lose a Sunday match at Cobb Stadium, including a 1-0 shutout over then eighth-ranked Virginia Oct. 1.

The Demon Deacons head to Coral Gables with an overall record of 12-4-0 and a 4-3-0 record in league play after falling to No. 3 Florida State earlier this week.