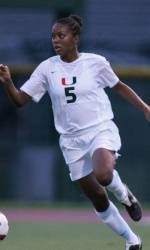 The Hurricanes head to the Sunshine State capital with an overall record of 7-6-1 and 1-5-1 mark in league play after falling 2-1 to Clemson Wednesday evening in Coral Gables.

Sophomore forward Paulelette Ricks-Chambers scored UM’s lone goal against the Tigers flicking in a pass from teammate Sheuneen Ta for her fourth goal of the season, placing her into a tie with fellow classmate Rachael Rigamat for the UM lead.

Florida State, currently ranked No. 3 nationally by Soccer America, sits at 10-1-2 overall with a 3-1-2 record in ACC matches.

The Seminoles’ Selin Kuralay has been FSU’s top goal scorer this season, finding the back of the net on seven different occasions in 2006.

Miami is 2-6-0 all-time versus Florida State, last knocking off the Seminoles in Tallahassee in 1999.