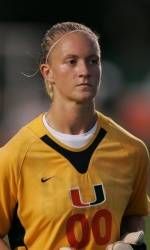 COLLEGE PARK, Md. – Miami head coach Tricia Taliaferro’s return to her alma mater proved to be an uneventful one in terms of goal scoring as the Hurricanes and ACC rival Maryland played to a scoreless tie Sunday afternoon.

Recording five and seven shots on goal respectively, the Hurricanes (7-5-1, 1-3-1 ACC) and Terrapins (4-7-2, 0-4-1 ACC), for whom Taliaferro starred for as a player from 1992-95, saw several scoring opportunities on the day but neither team capitalized through the 110-minute, double overtime contest.

The Hurricanes nearly broke the scoring drought with just over five minutes remaining in the first half when Jenna Levenson’s shot off a free kick was saved by Maryland keeper Nikki Resnick and deflected off the cross bar.

“I am pleased that we earned a point in conference play today,” said Taliaferro. “It’s very difficult to play on the road in the ACC. We improved our play as the game went on and I thought we stuck to the game plan and created some very dangerous scoring opportunities. Maryland’s goalkeeper made a fantastic save off a direct kick in the first half that could have been the difference.”

“Overall we played well and everyone that stepped on the field brought true work ethic,” added Taliaferro.