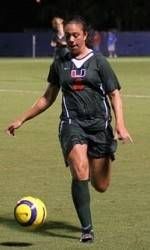 Hurricanes Come Up Short in 2-1 Decision to Boston College

CHESTNUT HILL, Mass. – Sophomore forward Rachael Rigamat’s goal in the fourth minute of play proved to be too little as Miami fell 2-1 on the road to ACC rival Boston College Thursday night.

Coming off a 1-0 upset over then eighth-ranked Virginia in which she headed in the game-winning goal Rigamat put the Hurricanes (7-5-0, 1-4-0 ACC) up early, footing a loose ball in the Boston College (8-4-0, 2-2-0 ACC) box and placing it left of Eagle keeper Sarah Buonomo for her team-leading fourth goal of the year.

Just over five minutes later, Boston College drew a penalty kick when Gina DiMartino, who would later record the game-winner, was fouled in the box. Jenny Maurer took the penalty kick for the Eagles and found the back of the net past UM keeper Laruen McAdam for the equalizer.

With 10 minutes remaining in the half, DiMartino fielded a pass from teammate Caitlin Hiler and fired off a shot into the far-right post past McAdam, who finished with six saves on the night, for the eventual game-winning goal.

The Hurricanes return to action Sunday, traveling to College Park, Md. for an ACC match-up with Maryland at 1 p.m.