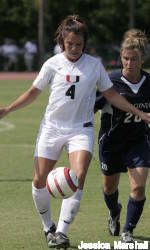 Hurricanes Pull 1-0 Upset over No. 8 Virginia

CORAL GABLES, Fla. – Rachael Rigamat followed up on her own deflected shot to head in a goal in the 54th minute as Miami stunned No. 8 Virginia 1-0 Sunday afternoon at Cobb Stadium.

Rigamat dribbled in and fired off a shot towards the short-side post that was blocked by Virginia keeper Christina de Vries. Quickly regaining herself in front of the net, Rigamat headed in the deflected shot before Virginia defender Nikki Krsysik could cover for de Vries, who fell out of position after the save.

“We knew Virginia played a really flat line, so the coaches told us to try to play behind them and try to use our speed to our advantage,” said Rigamat. “Sheuneen played a really good ball over the top and I was able to get to it.”

Playing on a hot, humid field with temperatures in the upper 80’s, the Hurricanes and Cavaliers battled back and forth in a game that would feature few legitimate scoring opportunities. Both teams combined for a total of just five shots on goal with the Hurricanes posting three and Virginia two on the afternoon.

Despite registering 12 total shots to UM’s six, Virginia’s closest scoring attempt came in the 84th minute when Jess Rostedt fired off a shot from the top of the box that sailed just right of upper-right 90 and UM keeper Lauren McAdam, who recorded her fifth shutout of the year.

“I think this will really help this team’s confidence,” said head coach Tricia Taliaferro of the victory. “We have been saying all year that we’ve been one goal or one play short all season and we just needed to learn how to make that extra push.”

“I’m really proud of our team and was pleased with how well we played from top to bottom.”

The Hurricanes return to action Thursday traveling to Chestnut Hill, Mass. for a match-up with ACC counterpart Boston College at 7 p.m.