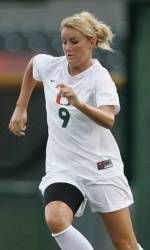 The victory over USF (4-2-1), UM’s fourth shutout of the season, improves the Hurricanes record to 6-1-0 tying the school record for the best start through seven matches.

Chapman’s goal, her first of the season, came on a corner kick sent in by freshman defender Jessica Wyble set up at the 62:31 mark. Wyble played the ball into the front of the box where Chapman was able to get up over a USF defender to head the ball in past the Golden Bull keeper.

Chapman and Wyble’s offensive statement capped off an impressive defensive effort led by the two, limiting the Golden Bulls to just one shot on goal on the night.

“I think we did a great job all night of dropping back and creating turnovers,” said head coach Tricia Taliaferro. “One of the adjustments we had to make was just to simply slow down. I think we were a little too fast in transition and once we starting looking for the extra pass, that created more opportunities.”

Following a 45-minute delay to the beginning of the match due to lightning, the two teams battled through the first period of what would be a very physical game.

UM nearly found the back of the net in 14th minute when sophomore midfielder Paulelette Ricks-Chambers got off a header in front of the box that found it’s way past keeper Casey Garret only to be knocked away by a USF defender at the last moment.

Combining for a total of just seven shots in the first half, the score was 0-0 heading into the break.

The intensity increased for both teams coming out of the intermission with neither side giving ground until Chapman’s goal in the 63rd minute.

South Florida took its first shot on goal of the night in the 72nd minute and would only register one more shot for the remainder of the game as UM keeper Lauren McAdam earned her fourth shutout of the year in the victory for the Hurricanes.