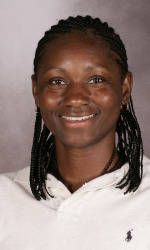 Having served as an assistant coach on the collegiate level at TCU, Arkansas State, Wisconsin-La Crosse and Cal State Northridge, Hall adds her impressive resume to the UM coaching ranks beginning this season.

“I am more than thrilled to add Lonnette to this coaching staff,” said Meier. “I have known her for years, competing against her on the court and on the recruiting trail when I was at Charlotte and she was at TCU, and couldn’t think of a better person to fill this position.”

“I think Lonnette is one of the nation’s best recruiters and she has shown throughout her career the ability to recruit South Florida, which I think is a major benefit to this program. She is one of the hardest working individuals I have ever met and look forward to the success she will help bring to UM.”

As the Director of Basketball Operations at UM, her responsibilities included organizing and coordinating team travel and practices and team and player schedules, as well as the production of alumni and team newsletters. She also worked with the UM Marketing and Sports Media Relations offices to help organize various promotional activities.

Hall came to Miami following a one-year stint as the Head Girl’s Basketball Coach at R.L. Paschal High School in Fort Worth, Texas during the 2004-05 season. In addition to day-to-day coaching duties at R.L. Paschal, Hall also managed the program budget and marketing activities in addition to overseeing the team’s booster club. Hall also organized HOOP Group, a youth basketball program in the Fort Worth area.

Prior to her stop at R.L. Paschal, Hall spent six years at TCU, serving as an assistant coach with the Lady Frogs from 1999-03 and as the Director of Basketball Operations during the 2003-04 season.

As an assistant coach with the Lady Frogs, Hall helped guide TCU to three-consecutive NCAA Tournament while coaching notable players such as Fort Lauderdale native and former All-American Sandora Irvin, who was later selected as the No. 3 overall pick in the 2005 WNBA Draft. Along with coaching, Hall’s responsibilities included recruiting, practice and game preparation efforts in addition to preparing the team’s travel arrangements.

While at TCU, Hall also served as an assistant director for the 2004 Conference USA Women’s Basketball Tournament and was a member of the TCU Athletic Department’s Outreach Committee, Mission Statement Committee and Diversity Subcommittee.

Hall’s coaching career began in 1998 at Hueneme High School in Oxnard, Calif., where she served as the Head Junior Varsity Girl’s Basketball Coach until 1990.

Following her stay at Hueneme, Hall went on to California State University-Northridge to serve as an assistant coach from 1992-94 before moving on to join the coaching staff at the University of Wisconsin-La Crosse from 1994-96. After two seasons at UW-L, Hall spent three seasons at Arkansas State as an assistant coach from 1996-99 prior to going on to TCU.

A native of Oxnard, Calif., Hall served in the United States Navy from 1986-88. She earned an associate’s degree in art from Ventura Junior College in 1991 and three years later received a bachelors degree in kinesiology from California State University-Northridge in 1994. Hall went on to earn a masters degree in sports administration from the University of Wisconsin-La Crosse in 1996.