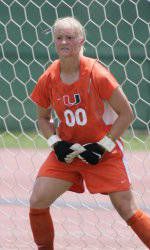 After downing High Point and UNC Greensboro last weekend at the UNCG Soccer Classic head coach Tricia Taliaferro and the Hurricanes’ sit at a perfect 4-0-0 on the season marking the second best start in school history. UM’s season opening run is second only to the 2001 team which opened with a school record five-consecutive victories.

Outscoring opponents by an average of just under two goals a game (2.25-to-0.50) the Hurricanes have seen goals scored by seven different players including sophomore midfielder Paulelette Ricks-Chambers who netted a pair Sunday in a 3-1 win over UNC Greensboro.

The Miami defensive efforts, led by junior goalkeeper Lauren McAdam’s ACC-leading 5.50 saves per game, have also played a major part in each of the four victories.

At 0-3-0 the Golden Panthers head to Cobb Stadium in search of their first win of the 2006 season.

“We are definitely excited to play FIU tomorrow night,” said Taliaferro. “This game is highlighted on our schedule year in and year out because of the cross-town rivalry. I am looking forward to an electric atmosphere and one the fans and players will definitely enjoy.”

“FIU has created a lot of offensive chances for themselves in the past three games and we expect for them to come out with the same mentality Wednesday night.”

This will mark the ninth meeting between the Hurricanes and the Golden Panthers with Miami holding a 4-3-1 series advantage. The two teams played to a 0-0 tie last season at FIU.

Tickets are just $5 dollars for adults and $3 dollars for children and senior citizens. To purchase tickets or additional information, please contact the Hurricane Ticket Office online at hurricanesports.com or call 1-800-GO-CANES.