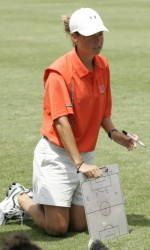 CORAL GABLES, Fla. – With the University of Miami women’s soccer team preparing for the 2006 season opener against UCF this Friday (Aug. 25), hurricanesports.com recently sat down with the head coach Tricia Taliaferro to talk about upcoming season.

Taliaferro, who enters her fifth season at UM in 2006, and Hurricanes return 8-of-11 starters from 2005, including three of the top five goal scorers. Among those returnees include junior forward Rebecca Tweneboah who will attempt to follow-up her sophomore campaign which saw her score a team-leading six goals.

Along with Tweneboach, redshirt junior midfielder Sheuneen Ta, a 2004 Second Team All-ACC selection, returns to play after missing the last six games of the 2004 season and the entire 2005 season with a pair of ACL injuries.

Also returning for the Hurricanes are sophomore midfielder Bryn Heinicke who finished second on the team in points (12) and goals (4) and topped the UM roster in assists (4), shots (40) and shots on goal (18) and sophomore forward Rachael Rigamat who was named to the Soccer Buzz Southeast Regional All-Freshman Team after registering two goals and four points.

HurricaneSports.com: What has been the general mindset of the team?

Tricia Taliaferro: “This team is made up of very driven and hard working players and coaches. Everyone on the team made a commitment to each other last November to be prepared to compete at a high level this fall. We are a very prideful group and our mindset is to do whatever it takes to be successful in the ACC and the NCAA. Every individual has put their trust in each other and the team as a whole has never been as strong.”

HS: On a team with just four seniors and 13 underclassman, have there been any players who have taken a leadership role?

TT: “A unique quality of this team is everyone is willing and able to be a leader at any given moment. Respect has been the foundation of the rebuilding process and everyone is willing to hold themselves and teammates accountable. Our team truly believes that everyone has something to contribute and no one individual is more important than the other. This philosophy has allowed us to work together and share the stresses of a competitive season.”

HS: You recently spent the summer as an assistant coach with the US National U-21 team at the Nordic Cup in Norway. What did you take from that experience to share with your team at Miami?

TT: “The most valuable thing I can bring back to the team is reassurance. We have been developing this team from day one with the same standards and expectations as a national team. Gaining the exposure to international play is not something every coach or player has the ability to do. I can only be thankful for the opportunity and communicate to my players that we are not far away from the highest level. We will continue to focus on the details of the game and be disciplined to execute them in practice and games. The one quality I find most important in successful players at any level is the willingness and understanding to make decisions at game speed.”

HS: Where there any specific players who stood out in the off season workouts?

TT: “I can honestly say that every player made strides in the off season. We had a few key players out with injuries and a large number of newcomers join the team last year. The combination of both made it difficult to trust and play as a unit. Our goal in the spring was to play for each other as a group and become familiar with specific tendencies of every individual. It was very nice to be able to utilize all the players on the roster and create a unified core. We ended the spring playing the best team soccer I have seen during my time at Miami.”

HS: Last season the true freshman wasted no time making their mark. Do you expect the same, if not better, results from this year’s newcomers?

TT: “Thankfully we had a very good core group of returners last season that welcomed the freshman to make their mark. Last years situation allowed for the newcomers to step right in and earn substantial playing time and experience. The ACC is extremely competitive and any time you can get an opportunity to compete at the highest level you get better. I expect the playing time to be very valuable because the majority of the team knows what it takes on a daily basis. Every year you hope to bring in a class that will challenge the returners to be better. I am confident the newcomers this year with do exactly that and expect them to make an immediate impact.”

HS: All but two of the nine players who registered goals from last season return. Offensively, what kind of expectations do you have for this year’s team?

TT: “Naturally, I would like to have a similar outcome as last season and in addition hope the newcomers will add to that number. We specifically recruited offensive-minded players to help finish the goal scoring opportunities we created during the season. We are very aggressive offensively and hope to add to our creativity in the attacking third. Expect to see very fast paced unpredictable attack from all positions.”

HS: Shifting to the defensive side, how important is our back line in a conference as skilled offensively as the ACC?

TT: “The ACC is definitely the most dangerous conference in terms of attacking personalities. Attacking in the ACC is not limited to forwards but midfielders and defenders as well. It is important to have a group of 11 players working together to play against other teams in the conference. We have a blue collar mentality and take defending personally, from our goalkeeper to forwards.”

HS: Wrapping things up, what can Miami fans expect from this year’s team?

TT: “Expect to see a very fast, exciting, organized and driven team to step on the field for every match. You will feel the passion from every player on the field. This team is on a mission to be successful in the ACC and the national level. We have spent many hours training and developing into a team that plays team soccer. Every year this team has become better and I expect to see the same for this season.”

The Hurricanes will open play this Friday against in-state rival UCF at 7 p.m. at Cobb Stadium and return Sunday to play host to Samford at 1 p.m.

Tickets for both games, as well as all UM home games, are just $5 dollars for adults and $3 dollars for children and senior citizens. All UM students receive free admission to home games with a valid Cane Card.