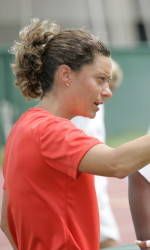 CORAL GABLES, Fla. – Head women’s soccer coach Tricia Taliaferro has announced the signing of forward Julia Demetrius (Greensboro, N.C) to a National Letter of Intent to play at the University of Miami along with the addition of midfielder Jenna Levenson (Boca Raton, Fla.) and forward Sammy Sanderson (Columbus, Ohio) who will transfer to UM from Florida and LSU, respectively.

“Julia, Jenna and Sammy are going to bring even more to what we feel is an already outstanding incoming class,” said Taliaferro. “Each one is capable of adding something to this program and we are definitely excited about the possibilities of what we are going to be able to accomplish with this incoming class.”

Demetrius, a 5-8 forward, heads to Miami from Greensboro, N.C. where, as a four-year letterwinner, she was an All-State and All-Conference selection at Northwest Guilford High School.

She has been a member of the North Carolina Olympic Development Program (ODP) team since 2002 and was a two-time Player of the Year as a member of the Greensboro Dynamo Super-Y (USL.) She also spent two seasons (2003, 04) with the Winston-Salem Twins club team and in 2005 played for the Charlotte Soccer Club Blue.

A 5-5 midfielder who will be a redshirt sophomore this upcoming season, Levenson heads to Miami following at two-year stay at Florida. As a freshman in 2004, she appeared in eight matches for the Gators, recording one assists. She sat out the entire 2005 season.

She was a three-year letterwinner at Boca Raton’s St. Andrews High School where she helped lead SAHS to the state semifinals in 2002. Prior to her time at UF, she was also a five-year member of the Florida State ODP team and a two-time member of the ODP Regional squad. She spent six seasons as a member of Team Boca.

Sanderson, a 5-1 rising sophomore forward transfer from LSU, appeared in 17 games with seven starts for the Tigers last season. She registered one goal on the year and added a pair of assists.

Prior to LSU she spent six seasons as a member of the Ohio South ODP team and was a member of the Region II Regional Team. On the club level, she helped lead the Ohio Premier to state titles in four the eight seasons she played. She graduated from the Columbus School for Girls.

Taliaferro and the Hurricanes open the 2006 season at home Friday, August 25 against in-state rival UCF.