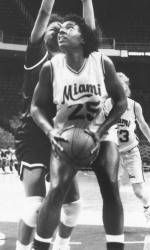 The group of 12 former standout players — one from each ACC school — will be honored during the ACC Women’s Basketball Tournament at the ACC Legend’s Brunch, which will be held on Saturday, March 4, at the Greensboro Coliseum.  Later that day, the Legends will be introduced to the ACC Women’s Basketball Tournament crowd at halftime of the semifinal games.

Meier, a former Duke standout from 1986-90 now in her first season with the Hurricanes, was named a Kodak/WBCA District II All-American and a First-Team All-ACC selection following her senior campaign with the Blue Devils. Named to the ACC’s 50th Anniversary Team in 2003 and the Duke Hall of Honor in 2002, Meier ranks in the top-five of 18 different Duke single game, season and career records.

Plowden, a four-year letterwinner at UM from 1990-94, was a prolific member of the 1992 and 1993 back-to-back BIG EAST Championship teams at Miami. A two-time BIG EAST First-Team selection, Plowden was named the 1992 BIG EAST Preseason Player of the Year and went on to earn MVP honors at the 1993 BIG EAST Championship Tournament. She currently ranks among the top 10 in nine different career records at UM and is one of only four players in school history to average at least 15 points and nine rebounds per game in a career.

Included in the inaugural class are 12 former players that represent four decades of ACC Women’s Basketball competitors. Below is a complete list of this year’s legends and the accolades from their playing career.