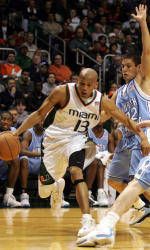 CORAL GABLES, Fla. (AP) – Tyler Hansbrough scored 25 points and Bobby Frasor made two key jump shots late in the game to lead No. 23 North Carolina to an 80-70 win over Miami on Sunday night.

Hansbrough went 11-for-17 from the floor, with many of those coming with Miami’s big men in his face. He scored 16 points in the first half on 7-of-9 shooting, but his teammates made the difference in the second half.

Hansbrough was on the bench for much of the biggest run for the Tar Heels (15-6, 6-4 Atlantic Coast Conference). With the game tied at 56 with 10:22 left, Frasor made a 3-pointer to ignite a 13-2 run that also included 3s from Wes Miller and David Noel.

Frasor sank consecutive jump shots to give North Carolina a 78-67 lead with less than 2 minutes remaining, helping hold off a late rally by Miami (14-10, 6-5).

Guillermo Diaz had 21 points, Anthony Harris scored 15 and Robert Hite 12 for the Hurricanes. Hite electrified the sold-out crowd with an alley-oop dunk on a perfect pass by Diaz, while Diaz dazzled with step-back jumpers and aggressive drives through the lane.

But Miami struggled with North Carolina’s diligent man-to-man defense in the second half.

Both teams were looking to recover from difficult losses. The Tar Heels fell short in an 87-83 home loss to No. 2 Duke on Tuesday, while the Hurricanes lost 86-77 in double overtime to North Carolina State.

Hansbrough endured physical defense by Miami’s big men to get most of his points in the paint. He grabbed several tough rebounds and blocked a Harris layup. At one point, an official spoke privately with Miami’s Anthony King and Hansbrough after a physical scramble for the ball.

Miami took its first lead of the game at 40-39 when Anthony King made two free throws with 19:22 to play. But a pair of foul shots by Reyshawn Terry at the other end gave North Carolina the lead.

The Hurricanes came right back, with Diaz hitting a 3-pointer to make it 43-41 Miami.

The Tar Heels kept up the pressure and eventually went in front for good. Hansbrough added another basket in the paint to give North Carolina a 51-47 lead with 16:11 left.

It was a revenge game for the Tar Heels, who lost 81-70 to Miami at home last month.