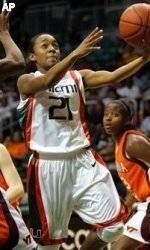 Coming off a tough 88-77 loss at No. 6 Maryland Wednesday night, first-year head coach Katie Meier and the Hurricanes sit at fourth place in the ACC with a league mark of 4-4 and an overall record of 14-7.

Miami continues to be one of the top offensive teams in the league, averaging 76.1 points per game which ranks fourth in the conference and 13th in the NCAA.

National Player of the Year candidate Tamara James, who moved into second place all-time in career points at UM with a 16-point outing against Maryland, tops the ACC in both scoring (20.6 ppg) and steals (3.00 spg).

Having lost four-in-a-row and five of their last six games, head coach Mike Petersen and the Demon Deacons are 10-10 on the year and 2-6 in league play.

Senior guard Cotelia Bond-Young leads WakeForest in scoring (17.7 ppg) and averages more three-pointers per game (3.3) than anyone else in the ACC.

Sunday’s game will be broadcast via tape delay on WVUM 90.5 FM immediately following the Miami-Winthrop baseball double-header beginning at 10 a.m.