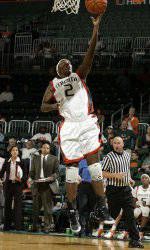 Hurricanes Face No. 6 Maryland on the Road Wednesday Night

A Quick Look at Maryland Following a 79-70 overtime win at Wake Forest Sunday, head coach Brenda Frese and the No. 6 Terrapins are 19-2 and 6-1 in the ACC. Maryland is the league’s top rebounding team (45.3 rpg) and the third highest scoring team (84.0 ppg) in the ACC.

Sophomore center Crystal Langhorne has been a key to the Terps success averaging 16.9 points and 9.0 rebounds per game – numbers which rank third and second in the ACC, respectively.

The Series Wednesday’s game will mark the sixth meeting between the Hurricanes and Terrapins. Maryland holds a 4-1 advantage in the all-time series, winning each of the last two contest including a 70-65 decision last season in Coral Gables.

Then freshman Crystal Langhorne turned in a career performance with a 22 rebounds and 29 points, going 12-of-15 from the field, as the 20th-ranked Terrapins escaped with a win.

Langhorne’s 22 rebounds was the third-highest single game mark in Maryland (18-6, 7-5 ACC) history and just was one shy of the school record of 23.

The Hurricanes (12-13, 4-8 ACC) were led by Tamara James who scored a team-high 27 points and tied a career-best with seven steals, but, behind Langhorne’s performance, Miami was out-rebounded 46-to-26 on the night en route to the win.