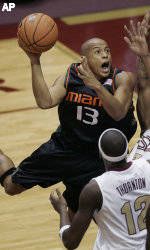 TALLAHASSEE, Fla. (AP) – Robert Hite scored eight of his season-high 31 points in overtime to lead Miami to an 84-78 victory over Florida State on Sunday.

Hite gave Miami the lead for good at 75-72 on a three point play with less than three minutes left in overtime.

Florida State narrowed the gap to 79-78, but a three point goal by Guillermo Diaz, with only a second left on the shot clock, sealed the victory with 18 seconds remaining. Hite then added a pair of free throws to close out the scoring.

The Hurricanes shut out Al Thornton, Florida State’s leading scorer, who was slowed by a knee injury suffered in the first half. Jason Rich led Florida State (12-5, 3-4) with 20 points while Alexander Johnson and Todd Galloway had 17 points each.

The teams traded the lead nine times and there were 10 ties. Miami’s biggest lead was seven points while Florida State never led by more than five.

The Hurricanes took a 69-67 lead with 3.2 seconds remaining in regulation when reserve forward Raymond Hicks put back a missed shot by Diaz. Florida State forced the overtime when Rich lobbed an inbound pass to Alexander who put in layup with 0.1 second left.

Miami out rebounded Florida State 39-20 and was perfect on the free throw line in nine attempts. Florida State made 15 of 23 free throws. The Seminoles hit 51.9 percent of their shots from the field and the Hurricanes 50.8 percent.