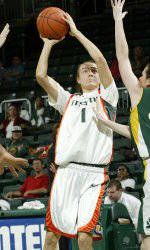 UM Welcomes No. 25 Virginia Tech to the BankUnited Center Sunday

A Quick Look at Virginia Tech Having lost three in a row, second-year head coach Beth Dunkenberger are 14-4 overall and 1-4 in ACC play after an impressive 12-0 start to open the season.

The SeriesSunday’s game will mark the eighth meeting between the Hurricanes and Hokies, former BIG EAST rivals who made their ACC debuts last season.

Having never lost to the Hokies at home (3-0) Miami leads the all-time series at 4-3.

In that game, Miami was overpowered by a Virginia Tech team that shot 54.1 percent from the field with all five starters scoring double figures as the Hokies at Cassell Coliseum.

Led by Kerri Gardin’s game-high 16 points, the Hokies overtook the Hurricanes in nearly every statistical category including rebounding (47-to-27), points in the paint (40-to-24) and three-point percentage (50.0-to-21.1.)

Game PromotionsMiami Hurricane women’s basketball fans will have the opportunity to collect player trading cards during all home games. The first 200 fans in attendance at each game will receive the cards, which will feature a different player each game during the 2005-06 including Sunday with senior forward Tatjana Marincic.Tickets Tickets are just $5 dollars for adults and $3 dollars for children and senior citizens. To purchase tickets or for more information please call the Hurricane Ticket Office at 1-800-GO-CANES or PURCHASE ONLINE at hurricanesports.com.