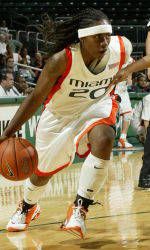 A Quick Look at NC State Legendary head coach Kay Yow and the Wolfpack are 12-6 overall and 2-3 in conference games. NC State is one of the best three-point shooting teams in the ACC, hitting 33.7 percent from beyond the arc.

The Series Thursday’s game will mark the sixth meeting between the Hurricanes and the Wolfpack. Miami has gone winless in each of the previous five meetings with NC State and have lost all three games played in Raleigh.

Miami lost two games to the Wolfpack last season, including the last meeting which resulted in a 71-68 loss in Coral Gables on Feb. 14.

In that game, NC State’s Rachel Stockdale drained a game-winning three-pointer off an in-bounds pass from teammate Kendra Bell with 27 seconds remaining to lift the 21st-ranked Wolfpack past Miami.

Tamara James scored 23 and Imani Dhahbu recorded 15 for the Hurricanes.