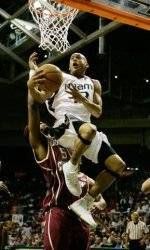 CORAL GABLES, Fla. (AP) – Craig Smith had 18 points and 14 rebounds Saturday night, helping No. 21 Boston College overcome a flurry of 3-pointers by Miami in the second half to win 65-61.

Smith made six of six free throws in the final 2:19 for the Eagles (14-4, 2-3 Atlantic Coast Conference). They won their third game in a row and beat Miami for the eighth consecutive time.

The Eagles withstood the onslaught, and Jared Dudley sank baskets on consecutive possessions to put them ahead to stay, 55-54, with 3:25 to go. Tyrese Rice’s 22-footer as the shot-clock buzzer sounded put the Eagles up 60-55 with 37 seconds to go.

Struggling to find openings against Miami’s zone defense, Smith took only one shot in the second half. But the Eagles got the ball to him down the stretch, and his free throws helped clinch the victory.

Boston College made five of six free throws in the final 27 seconds.

Dudley finished with 15 points, four assists and two steals in 40 minutes. Smith missed only two shots, finished 6-for-6 at the line and played 39 minutes.

Robert Hite scored 22 points for Miami. Guillermo Diaz added 18 but took – and missed – four consecutive shots down the stretch for Miami. Guard Anthony Harris was held scoreless until he hit a 3-pointer with a second left.

Smith sank four baskets in the first 6 minutes to help Boston College lead 14-5. The Hurricanes scored only 12 points in the first 12 minutes, but back-to-back baskets by Hite pulled them even at 19-all.

Boston College scored the next nine points and led 28-21 at the half.

The Hurricanes sank four 3-pointers early in the second half to spark their rally. They erased a 36-29 deficit by making six consecutive shots, including a pair of 3-pointers.

Diaz’s steal and layup tied the score, and his driving layup on the Hurricanes’ next possession put them ahead. Hite sank a 3-pointer, then made a layup for a 43-36 lead to cap the 14-0 run.