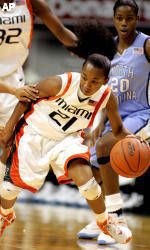 CORAL GABLES, Fla. – Coming off a 74-52 win on the road over ACC foe Clemson Thursday night, Miami breaks from conference play Sunday, squaring off with 13th-ranked Georgia at 3 p.m. as part of the ACC/SEC Russell Athletic Shootout at the Gwinnett Arena in Duluth, Ga.

First-year head coach Katie Meier and the Hurricanes are 12-3 on the year marking just the fifth time in school history UM has posted 12 or more wins in their first 15 games. The Hurricanes rank fourth in the ACC and among the top 15 teams in the country in scoring, averaging 77.5 points per game.

UM’s scoring has been paced by senior forward Tamara James who tops the ACC in scoring with 21.0 points per game. Senior guard Melissa Knight has scored 14 and 23 points in UM’s last two games and ranks third on the team with 13.0 points per game.

Sunday’s game will be televised live on Fox Sports Florida (FSFL) and Fox Sports South (FSNS) as part of the ACC Regional Sports Network (RSN). The game will also be broadcast live on WVUM (90.5 FM) and can also be heard live on the web at www.hurricanesports.com which will also feature live scoring and stats

A Quick Look at Georgia

After a 94-85 loss at No. 1 Tennessee Thursday night, the Bulldogs are 11-4 on the year having won four of their last five games. Georgia is averaging 84.3 points per game behind an impressive 47.9 shooting percentage.

The Series vs. Georgia

Sunday’s game will mark just the second meeting between Miami and Georgia. The Bulldogs won the only previous meeting, downing UM 91-51 Feb. 20, 1982 in Athens.