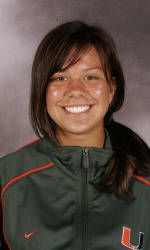 Rigamat, native of La Crescenta, Calf., scored two goals on the year, both of which came in UM’s 3-0 win over 14th-ranked Princeton. She also recorded 14 shots on goals in her first season with the Hurricanes.