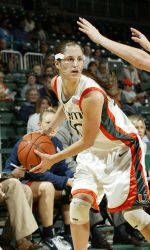 The Game Looking for their first road win of the season, Miami heads upstate Tuesday night to take on in-state rival UCF in Orlando at UCF Arena with a 7 p.m. tipoff.Radio, Television and Internet BroadcastThe game will be broadcast live on WVUM (90.5 FM) and can also be HEARD LIVE on hurricanesports.com which will also feature live scoring.The Hurricanes Coming off a disappointing 83-74 loss at Montana last Saturday, the Hurricanes are 7-2 on the year as they take to the road for just the second time this season.

First-year head coach Katie Meier and the Hurricanes rank fourth among ACC teams in scoring (76.8 ppg) and are allowing just 62.4 points per game by opponents.

UM’s entire starting five have averaged double-figure scoring over the last two games including junior guard Renee Taylor who has averaged 16 points in the last two contests. Taylor has averaged 13.8 points per game on the year which ranks 11th in the conference.

In the first two starts of her career, freshman center Brittany Denson has nearly averaged a double-double over the last two games recording an average of 10.5 points with nine rebounds per game.

The Golden Knights The Golden Knights are 2-7 this season after splitting a pair of games last weekend at the UCF Holiday Tournament. UCF upended Central Michigan 57-48 Friday night to snap a six-game skid but suffered a 65-22 loss to UT-Arlington the following night.

UCF has been led by junior guard Francine Houston’s 17.6 points per game. That mark ranks third in Conference USA in scoring. Houston also tops C-USA in three-point field goals made (3.44) which also ranks second in the nation.

The Series This will mark the 12th meeting between the Hurricanes and Golden Knights. Having won eight of the last nine meetings and each of the last six, including last year’s 60-50 decision in Coral Gables, Miami leads the all-time series at 8-3.

After playing 11 times from 1978-89, the in-state foes did not square off for 15-consecuttive seasons from 1989-2004 before renewing the rivalry last season.

Last season Tamara James turned in a game-high 29 points to lead the Hurricanes past UCF, 69-50, on Dec. 13 in Coral Gables.

James fell one rebound shy of a double-double on the night, pulling down nine rebounds, including seven in the first half. Then-senior Fallon Phanord also ended one rebound short of double figures with a career-best nine rebounds.