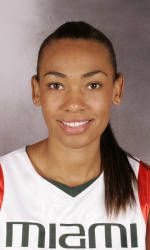 A Few Minutes with Melissa Knight

Hurricanesports.com recently sat down for a few minutes with senior forward Melissa Knight to talk about the upcoming season. Here’s what Knight had to say…

Coming back off an ACL injury what is this season going to be like? You have a little bit different mentality. You graduated and are working to get a second degree, but also coming back for your fifth season at UM.

“It’s not that hard in the classroom to come back and focus and study because I already have my degree. On the court, I think I’m more determined and more willing to give it my all because I can give more attention to basketball and I’ve already seen a year go to waste just from my injury. I just want to go out with a bang.”

Sitting out last year, you got to see the game from a coach’s perspective. Do you think that helped you in terms of knowing what’s going on with the game and learning the things you can do and also how to help teammates?

“Just watching games has mad me see everybody and what they bring to the floor, and what they can bring to the basketball program. Just knowing everybody’s weaknesses and strengths can help me create better opportunities. I think I had a better sense when I got out there on the court and also seeing just from a coach’s standpoint like mistakes that other people make game by game. Hopefully, I’ve learned from sitting on the bench and watching our team make mistakes and we can go into the season not making the same mistakes that people have made in the past.”

After rehabbing, what did you do in the summer to get prepared for this season?

Last year you sat out, so this will be your first year playing against some of these ACC teams. Are you excited about getting to play against new players, because for you, it’s a whole new ballgame?

“Everyone in the ACC is more athletic and that’s good because I love running up and down the court. Playing against ACC teams, and having the opportunity to play in two leagues for two different coaches is exciting because not many people can say they have done that.”

Speaking of coaches, do you think you will enjoy coach Meier’s style – which as you mentioned is a little bit more uptempo?

“I think her style fits our program right now because we’re very small. Everyone seems to be 5-8 to 6-1 at the most and I think, because we’re small, we have to run more and it gives us an advantage where we have a disadvantage.”

You graduated last May and you’re going back to get a second degree. What are your plans after school?

“I have some connections with the NBA, so hopefully working in marketing or management department in a NBA related field. And I’m actually working on a business plan to start a company.”

What kind of company?

“It’s a franchise of sorts.”

This will be your fifth year, do you think you’ve accomplished a lot of the goals that you set for yourself on and off the court?

“Definitely off the court, I got my degree and I wanted to do that. On the court I have a couple more things I want to accomplish and hopefully by the end of this season I can do that and go out on a good note and succeeding in some of my goals.”

Where do you see this team going this year?

“Since I’ve been at UM, since I’ve played anyway, we’ve gone to the postseason. It’s my senior year and I don’t want to change that. And I don’t want to go the NIT. We are going to the NCAA Tournament and we’re making it past the first round. You can quote me on that.”