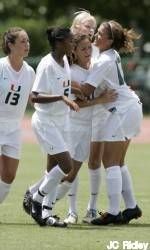 CORAL GABLES, Fla. – The University of Miami women’s soccer team will break from conference play Tuesday as they travel upstate to face in-state rival UCF at 7 p.m. at the UCF Soccer Field in Orlando.

Having won two of their last three games, fourth-year head coach Tricia Taliaferro and the Hurricanes head to UCF with an overall record of 7-9-1 looking to bounce back from a tough 3-1 loss to No. 6 Florida State Sunday in Coral Gables.

Freshman midfielder Bryn Heinicke scored in the 65th minute against FSU marking her fourth goal of the year which ties her with redshirt sophomore forward Rebecca Tweneboah for the UM lead.

Heinicke leads the Hurricanes in nearly every other statistical category including points (12), game-winning goals (2), assists (4), shots (38) and shots on goal (18).

The Golden Knights play host to UM with an overall record of 7-8-0 this season after claiming victories in three of their last four contest.

UCF is led by junior forward Roberta Pelarigo who tops the Golden Knight roster with eight goals on the year.

Tuesday’s game will mark the seventh meeting between Miami and UCF, who leads the all-time series at 2-4-1.