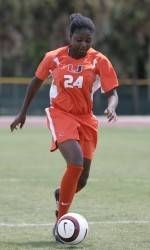 Hurricanes Fall 1-0 to No. 7 Virginia

CHARLOTTESVILLE, Va. – The University of Miami surrendered a game-winning goal in the 55th minute to fall 1-0 to No. 7 Virginia Sunday afternoon at Klockner Stadium in Charlottesville, Va.

Virginia managed to get off a total of 12 shots while holding the Hurricanes to just three shots on the afternoon to tie the UM record for the fewest shots taken in a game by a Miami team.

The two teams fought through a scoreless first half and came back in the second for nearly 10 minutes of play until UVa’s Jess Rosted dribbled through the UM defense and found Curtis, who got off the game-winner behind McAdam in the 55th minute.