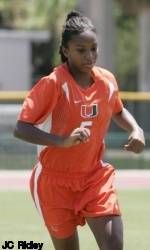 CORAL GABLES, Fla. – Looking to snap a three-game slide, the University of Miami women’s soccer team will head to Blacksburg, Va. Thursday to take on ACC rival Virginia Tech in a conference match-up at 7 p.m.

The Hurricanes travel to Virginia Tech for their first ACC road game with an overall record of 5-5-1 and an 0-2 mark in ACC play after dropping their first two conference games of the season – a 1-0 double-overtime loss to NC State last Thursday and a 4-0 loss at the hands of top-ranked North Carolina Sunday in Coral Gables.

Coming off a school record-tying 13-save outing against UNC, sophomore keeper Lauren McAdam heads into Thursday’s game as the ACC’s leader in both saves (59) and saves per game (5.90).

Virginia Tech hosts Miami with an overall record of 4-5-1 after opening conference play with a pair of road losses last week.

The Hurricanes and Hokies have split all five previous meetings with the all-time series at 2-2-1 for both teams. Miami’s two losses to Virginia Tech both came last season in Blacksburg.

Fans can listen to Thursday’s game live by clicking HERE.

For updated news, notes and stats on the University of Miami women’s soccer team, log onto the Official Website of Hurricane Athletics, www.hurricanesports.com.