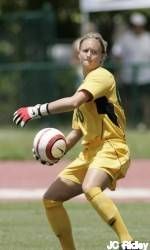 Sophomore keeper Lauren McAdam tied the school record for saves in a game with 13 on the day, but the Tar Heels (10-0-0, 2-0-0 ACC) proved to be too much, posting a total of 36 shots – a school record for most shots taken by an opponent against UM – while holding the Hurricanes’ (5-5-1, 0-2-0 ACC) offensive attack to just five shots.

North Carolina opened the game on the attack, recording a total of 14 shots in the first half, but McAdam, who turned in seven saves in the first half, and Hurricane defensive efforts held UNC in check as the two teams headed into the half scoreless.

The scoring drought would last just over seven minutes into the second half when UNC’s Lori Chalpupny scored from the far left wing on an attempted cross that sailed left and over the top of McAdam to find the back of the net, giving the Tar Heels their first goal of the day in the 53rd minute.

Guess posted her first goal of the day off her own rebound just under seven minutes later, firing off a shot inside the box right in front of McAdam who couldn’t recover from saving a Guess shot just moments before.

North Carolina’s Heather O’Reily added UNC’s third goal of the day in the 74th minute, taking a pass in the box from the deep left corner from teammate Jaime Gilbert and turning to score in the short side of the net.

The Tar Heels final goal of the day would be Guess’ second as she took a feed from Lindsay Tarpley in the box to score in the left corner in the 85th minute to give UNC the eventual 4-0 win.

The Hurricanes return to action Thursday, traveling to Blacksburg, Va. to take on Virginia Tech at 7 p.m.