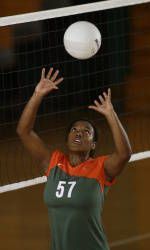 With the win, the Hurricanes improve to 6-3 overall and 1-0 in ACC play. The Eagles fall to 5-6 overall and 0-2 in their inaugural season in the ACC.

The Hurricanes never trailed in the first game and led by as many as eight points, to take a 30-24 victory.

Game two saw much of the same, as the Hurricanes jumped to an early lead that they never surrendered. With the score at 26-15 in favor of Miami, the Eagles reeled off nine-straight points but could not solve the Hurricanes, who used back-to-back kills by Johnson and Robinson and forced a BC attacking error to put the game away, 30-23 and take a 2-0 match lead.

The Eagles scored first to start game three but four consecutive Miami kills put the Hurricanes up 11-5. BC then went on a 10-to-2 run to tie the score at 19-all. The Hurricanes regained a two point lead but the Eagles would not go quietly as they tied the score at 25-all and once again at 29. Down 30-29, Miami looked to Johnson who knocked down three back-to-back kills to give Miami a 32-30 win and the match victory.

The Hurricanes held the Eagles to a .177 attacking percentage and led in mostly every statistical category including kills (56/44), assists (51/36) and digs (70/51). The dig total marks the first time that Miami has tallied at least 70 digs since October of last season when they registered 75 against North Carolina.

Miami returns to action Sunday afternoon with a 1:00 p.m. match-up against Maryland.