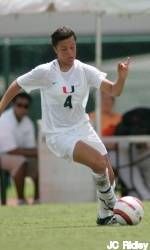 After battling through 90 minutes of scoreless regulation play, which included a 15-minute span of extremely heavy rain, the Hurricanes (5-4-1, 0-1-0 ACC) and Wolfpack (5-4-0, 1-0-0 ACC) rolled through the first overtime without a goal to move to a second overtime period.

In the second overtime, Tognetti knocked down a corner kick from teammate Lindsay Vera and fired off a shot from in front of the net that was deflected. Tognetti quickly footed her own rebound and got off a shot to score past UM keeper Lauren McAdam in the 105th minute to give the Wolfpack the win.

“It’s unfortunate that we gave up the game-winner off a corner kick because I felt like we did an excellent job defending the corners and throw-ins all night,” said head coach Tricia Taliaferro. “It just didn’t come to us tonight. We created opportunities, but just couldn’t capitalize on those chances. I felt we fought hard all game and our team really battled, but in the end we just didn’t finish.”

The Hurricanes and Wolfpack fought through a physical first half that saw 12 combined shots, but just two on goal – both recorded by NC State.

Heading into the second half with the score knotted at zero, UM and NC State were met by a heavy down-pour that soaked Cobb Stadium, slowing down an already defensive game.

“In all of my years as a coach,” Taliaferro said, “this was probably the worst rain I have ever seen.”

The two schools would play out the remainder of regulation without a goal to send the game into the first overtime.

Miami’s closest scoring opportunity came midway through the first overtime when freshman midfielder Rachael Rigamat ran down a ball from midfield to create a one-versus-two situation with her against NC State keeper Kim Selz and a Wolfpack defender.

Rigamat reached the ball just before Selz and went around the keeper but sent the ball just wide of the net to take away the scoring angle on the empty goal.

Still without a score, Miami and NC State moved into the second where, in the 104th minute, NC State’s Tami Krzeszewski fired off shot from over 20 yards out towards the UM net only to have it saved by McAdam – one of her four saves of the night.

McAdam wasn’t able to knock down the ball to gain possession setting up Vera’s corner kick that led to Tognetti’s game-winner in the 105th minute.

Freshman midfielder Bryn Heinicke led the Hurricanes with five shots and two on goal followed by Rigamat with three shots.