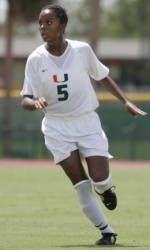 With the score tied at one goal apiece, Mollon fielded an assist from the USC (4-3) duo of Jessi Swaim and Erin Sullivan inside the box and flicked it into the net behind Miami (5-3-1) keeper Lauren McAdam at the 70:50 mark to lead the Gamecocks to the 2-1 win.

In a physical defensive battle, the Hurricanes and Gamecocks combined for just 14 shots with only four shots, including just two on goal, recorded by Miami – a season low.

South Carolina struck early, scoring in the second minute of the game when Alex Mouton scored from inside the box off a cross by Mollon.

The Hurricanes answered with the equalizer just over six minutes later when Ricks-Chambers, who scored the game-winner Friday night against Auburn, broke through the USC defense and fired off a shot from inside the 18-yard line past South Carolina keeper Laura Armstrong to tie the score at one-all.

The two teams would play with the score tied for the remainder of the half and for over 25 minutes into the second until Mollon’s game-winner in the 71st minute.