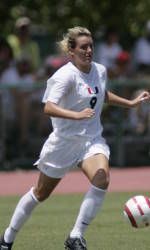 The trio helped lead the Hurricanes to a 2-1 victory over host Indiana Friday night in the tournament opener and nearly led UM to an upset over 14th-ranked <?xml:namespace prefix=”st1″ ns=”urn:schemas-microsoft-com:office:smarttags”?>Marquette Sunday afternoon en route to the runner-up title at the tournament.

McAdam was named the best keeper of the weekend, posting 13 saves while allowing just two goals in net. Chapman, who scored UM’s first goal Friday night against IU, was one of only two defenders named to the all-tournament team. Ricks-Chambers joined Christine Chuck of Xavier as the only two freshmen to be honored.

After splitting a pair of games, the Hurricanes finished second in the overall tournament standings behind Tournament Champion Marquette, who also won over Xavier Friday night.

Marquette (2-0 on the weekend, wins over Xavier and Miami)

Miami, (1-1 on the weekend, win over Indiana and lost to Marquette)

Indiana (1-1 on the weekend, win over Xavier and lost to Miami)

Xavier (0-2 lost to both Marquette and Indiana)