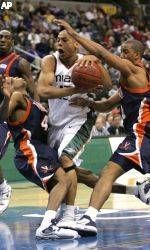 WASHINGTON – J.R. Reynolds scored a career-high 32 points and made surecoach Pete Gillen’s coaching tenure at Virginia would last at least one moregame, leading the Cavaliers to a 66-65 victory over Miami on Thursday night inthe first round of the Atlantic Coast Conference tournament.

Reynolds made 10 of 14 shots, including 5 of 7 3-pointers, and got virtuallyno support from his teammates until a 9-4 game-closing run that broke afive-game losing streak and put Virginia (14-14), seeded last in thetournament, into Friday’s quarterfinals against third-seeded Duke.

Devin Smith, who was 1-for-9 at the time, hit a 3-pointer with 2:26 to playto give Virginia its first lead of the second half, 62-61. Freshman SeanSingletary also struggled all game, but he made a tough short jumper in trafficto push the lead to three.

However, the game was in the balance until literally the final second.Guillermo Diaz made two free throws with 22 seconds remaining to pull Miamiwithin one, 66-65. Anthony King then stole an errant inbounds pass, giving theHurricanes the chance to set up the final shot for the win. Anthony Harris waswide open for a 3-pointer from the left wing, but his attempt bounced off therim and time expired as players fought for the rebound.

Diaz scored 20 points, his 26th consecutive double-digit game, to lead Miami(16-12), but he made just 5 of 15 shots. The Hurricanes shot 31 percent fromthe field and made just one field goal in the game’s final 10 minutes.

Miami, picked to finish last in the conference in the preseason poll,entered its first ACC tournament as the No. 6 seed in Frank Haith’s firstseason as a head coach, but the loss probably ends any hope of receiving anat-large bid in the NCAA tournament. The Hurricanes have lost five of theirlast six.

Gillen improved to 2-7 in the ACC tournament, and his only other victorycame in last year’s play-in game. His future has come into question during aslide from a 10-1 start that had the team ranked in the Top 25 on Dec. 27.

Gillen shook up his lineup, giving freshman center Tunji Soroye his firststart of the season while bringing Reynolds and Elton Brown off the bench.Reynolds turned out to be the only consistent offensive threat, making 10 ofthe team’s 22 field goals and becoming the first Virginia player to score 30points in an ACC tournament game since 1995.

With expansion to 11 teams, the ACC no longer has a true play-in game, butthis contest had a play-in feel as both teams struggled to score. TheHurricanes got eight of their first 12 points on putbacks off offensiverebounds and didn’t score a point outside the paint until Harris’ 3-pointerwith 6:24 to go in the half.

A 10-0 run helped Miami take a 34-30 halftime lead. The Hurricanes keptVirginia at arm’s length for much of the second half but never could get thelead to double digits. Miami relied on free throws for all but two of itspoints over the final 10 minutes, allowing Virginia to rally for the win.