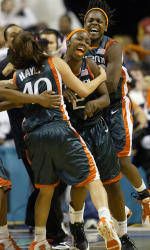 GREENSBORO, N.C. – Junior Tamara James caught a full-court pass from teammate, senior Yalonda McCormick in the paint and turned to score over two Yellow Jacket defenders as time expired to lift the ninth-seed Hurricanes past eighth-seeded Georgia Tech, 60-58, Friday afternoon in the opening first-round game of the 2005 ACC Women’s Basketball Tournament at the Greensboro Coliseum.

Trailing by two at 58-56, the Yellow Jackets (13-14) capitalized on a missed free throw UM’s (13-15) McCormick when, in transition off the McCormick miss, Jill Ingram found a wide-open Janie Mitchell who was able to tie the game at 58 with just under two seconds remaining.

UM head coach Ferne Labati called a time out following the Mitchell basket to set up the Hurricanes’ chance at the game-winner.

Coming out of the timeout, McCormick inbounded the ball with 1.6 seconds showing, lofting it into the paint to James who fought off two Georgia Tech defenders to grab the pass. James brought the ball down and threw up a shot while spinning to the basket with four-tenths of a second remaining and watched as the shot bounded on the rim and fell through as time expired to give the Hurricanes the win, making their inaugural game in the ACC Tournament a memorable one.

James finished as the Hurricanes’ leading scorer with 15 points and led UM with seven rebounds and five steals. Junior Katie Hayek scored 15 in the first start of her career for the Hurricanes and McCormick and junior Tatjana Marincic added 11 each in the UM win.

The Hurricanes – who out-shot the Yellow Jackets 46.9-to-35.5 percent – fell behind early in the game, trailing the Yellow Jackets 8-1 in the game’s early minutes. UM found a rhythm and tied the score at 10-all before putting together a 13-0 run to take a 23-12 lead with 5:22 remaining in the half.

Miami kept Georgia Tech at bay for the remainder of the half, taking a 36-24 lead into the half behind James and Hayek who scored 10 and 13, respectively.

Georgia Tech’s Mitchell led all scorers with 21 points and pulled in seven rebounds for Georgia Tech.

The Hurricanes advance to the quarterfinals of the ACC Tournament where they will take on the ACC regular season champions, No. 1 seed North Carolina Saturday at 12 noon. Saturday’s game with North Carolina will be televised live on the ACC’s Regional Sports Network (FOX Sports Net, SUN Sports and Comcast Sports Net.)