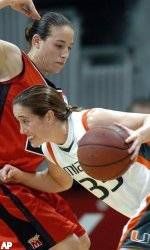 Hurricanes Come Up Short in 70-65 Decision over No. 20 Maryland

CORAL GABLES, Fla. (AP) – Freshman Crystal Langhorne turned in a career performance with a 22 rebounds and 29 points, going 12-of-15 from the field, as 20th-ranked Maryland escaped with a 70-65 win over Miami Thursday night at the Convocation Center.

Langhorne’s 22 rebounds was the third-highest single game mark in Maryland (18-6, 7-5 ACC) history and just was one shy of the school record of 23, which has been recorded twice.

The Hurricanes (12-13, 4-8 ACC) were led by Junior Tamara James who scored a team-high 27 points and tied a career-best with seven steals, but, behind Langhorne’s performance, Miami was out-rebounded 46-to-26 on the night en route to the win.

Miami led for most of the first half and held a seven-point, 23-16, advantage over the Terrapins with just over five minutes left in the first half, but Maryland chipped away at the Hurricane lead and following a 6-1 run to close out the half, headed into the locker room with a 30-26 lead.

Maryland carried the momentum into the second half, opening the lead to 10 just under two minutes into the half.

The Hurricanes fought back over the next six minutes and eventually tied the game at 42-all with just over 12 minutes to play.

From that point, Miami stayed within six points of until Langhorne pushed the Maryland lead to eight at 67-59 with 1:16 remaining.

With 22 seconds left to play, James picked Maryland’s Kalika France and following a miss by Yalonda McCormick, the Hurricanes’ Imani Dhahabu pulled down one of her nine rebounds on the night and drew a foul, setting up an opportunity to tie the game with 11 seconds left.

Dhahabu couldn’t capitalize and the Terps went on to take the 70-65 victory.

Dhahabu fell one rebound shy of a double-double, scoring a career-best 18 points while McCormick scored 13 points and dished out six assists.

The Hurricanes return to action Feb. 24, traveling to Durham, N.C. to take on Duke at 7 p.m. and Maryland hosts Virginia Feb. 20 in College Park, Md.