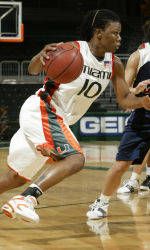 The Hurricanes will meet up with No. 23 NC State for the fifth time in school history and the second time this season Monday evening at 7 p.m. at the ConvocationCenter. The Wolfpack downed the Hurricanes, 73-59, in Raleigh in the first meeting this season to remain perfect at 4-0 all-time against UM. Monday’s game will be televised live on ACC’s Regional Sports Network (Fox Sports South and Sun Sports) with Beth Mowins calling play-by-play and Debbie Antonelli providing color analysis. The game can also be heard live on WVUM (90.5 FM) and can also heard live on www.hurricanesports.com, which will also feature live stats and scoring. Tickets are just $5 for adults and $3 for children and seniors and can be purchased through the Hurricane Ticket Office at 1-800-GO-CANES.

Miami returns to Coral Gables on the wake of a 66-60 victory at Virginia Thursday night and have now won four of their last five games. Included in those four wins were three teams – Florida State, Virginia Tech and Virginia – that were either ranked at the time, or were ranked or receiving top-25 votes at some point during the season. UM’s only loss during that five-game stretch came on a 72-64 decision to No. 3 Duke. Junior Tamara James leads the ACC and is second in the nation in scoring, averaging 23.1 points per game and has produced back-to-back 30-point games, scoring 35 against Virginia Tech and 31 at Virginia. James also leads the Hurricanes in rebounding, pulling in 7.0 boards per game. Senior Yalonda McCormick, who is second in the ACC in assists (6.4) and steals (2.9), enters Monday’s game needing just seven points to become just the 18th player in school history to score 1,000 career points. With 1,000 points, McCormick would also become only the second player in school history to record 1,000 points and 500 assists. Sophomore Imani Dhahabu has stepped up in the last four games, averaging 6.8 rebounds and 8.8 points per game while junior Tatjana Marincic has provided a spark off the bench, averaging 6.7 points over the last three games.

In her 30th season at NC State, head coach Kay Yow and the 23rd-ranked Wolfpack head to Coral Gables with an overall record of 17-5 and a 6-3 mark in ACC play. NC State has won five of their last six games, winning at Georgia Tech, 83-59, Thursday in their last outing. Their only loss during that six-game stretch was a three-point, 52-49, decision to No. 1 Duke Jan. 30. NC State boasts one of the ACC’s toughest defenses, allowing just 55.8 points per game and leads the conference in turnover margin (+6.82). Junior Billie McDowell leads the Wolfpack in scoring, averaging 11.3 points on the season and 15.0 points a game in ACC play. Fellow classmate Tiffany Stansbury is second on the team in points with 11.0 per game and paces the Wolfpack in both rebounding (6.8 rpg) and blocks (1.95 bpg).