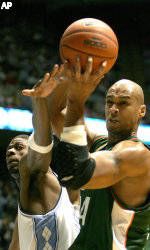 CHAPEL HILL, N.C. – Sean May had 17 points, Jawad Williams and Jackie Manuel each added 14 and North Carolina made the most of a rare home game, beating Miami 87-67 Saturday night.

Raymond Felton and Rashad McCants had 10 points apiece for the No. 6 Tar Heels (16-2, 5-1 Atlantic Coast Conference), who are in the middle of a stretch during which they play six of eight games on the road. That run includes a loss at Wake Forest last Saturday – the only one in the past 17 games – and trips to Duke and to Connecticut in the next couple of weeks.

Manuel, the only starter not averaging in double figures, matched his previous season total with two 3-pointers. His first one late in the first half was part of a 20-3 run that spanned halftime to give North Carolina control, giving the capacity crowd that included soccer star Mia Hamm and husband Nomar Garciaparra plenty to cheer.

The Hurricanes (12-5, 3-3) have been the surprise of the conference after they were picked to finish 11th in the newly expanded ACC. With victories over North Carolina State and Virginia – plus an upset at Florida – they’ve proven they brought more to the league than their football program.

But Miami struggled in its third trip to Chapel Hill since 2000-01. Guillermo Diaz finished with 30 points and leading scorer Robert Hite was held to six points, 12 below his season average.

Point guard Anthony Harris appeared particularly rattled by North Carolina’s trapping defense. His first shot was blocked by Jawad Williams, and he had turnovers on the next three possessions, earning a seat on the bench next to coach Frank Haith.

The Hurricanes recovered a bit and pulled to 29-25 before the Tar Heels got going.

Quentin Thomas and Melvin Scott each made two free throws and Manuel connected from long range to increase the margin to 11, and Felton later closed out the half with two more free throws for a 40-26 lead.

The second half was more of the same. McCants, the Tar Heels’ top scorer, tipped in a miss for his first points of the game, and May converted two free throws and had a 3-point play to make it 47-26.

After the Hurricanes got within 13, McCants started and finished an 11-0 run with 3-pointers, and the lead was never less than 18 after that.